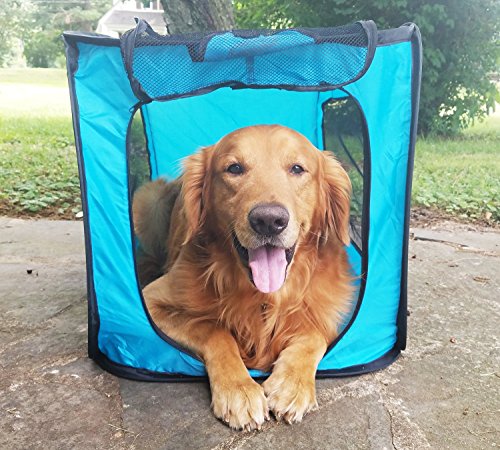 Today, we review the Bark Brite Collapsible Travel Dog Crate. And trust us, it’s quite an eyeful. In our research on this product, we found a lot of things about this product and most of them failed to impress us.

But before we get into the main review, a bit about the brand.

Well, when we did our research, we couldn’t really find anything on the brand.  No website, nothing. Just a Facebook page and that’s all. Of course, that got us concerned.

The brand does have products that have been reviewed on different review platforms, though. However, it doesn’t seem like anyone has any information on this brand.

So, we decided to check out how other products from this brand are doing in the market.

From our research, it would appear Bark Brite does make many dog products. However the ones we were able to find from our research include paw protectors (dog boots) a life jacket and an LED dog collar.

Well, how are these products doing? Our digging tells us that they are just doing okay. Not exactly great. And we won’t exactly call them bestsellers or customers’ favorites.

However, its Bark Brite Collapsible Travel Dog Crate is probably its worst product by customers’ standards.

Want to find out why? Keep reading.

Who Is The Bark Brite Collapsible Travel Dog Crate For?

We are finding it hard saying what dog exactly this crate was made for. Honestly.

On a good day, we would have said to use this for crate-trained dogs being that it is a soft crate. But we can’t exactly say that and still go to bed with a clean conscience.

This crate is bad, and this is us trying to be nice.

With other soft crates, your dog would have to be destructive to damage the crate. But with this crate your dog just has to be a living, breathing thing.

The Bark Brite Collapsible Travel Crate is collapsible as the name of the crate suggests. And it actually does collapse flat. But of course, there are still problems. Bad ones…

First of all, we found that this won’t fit into the case it came with once you unfold it.

While it is possible that the customer(s) involved are doing the things the wrong way, Bark Brite should have included instructions with this crate so customers know what they are doing. It just helps to keep the portability business moving smoothly.

As for setting up, let’s just say that setting this crate up is an extreme sport. This crate has slapped a number of customers hard. We actually mean that literally and we kid you not.

Well, in all fairness, the manufacturers did give a fair heads up. “This crate opens with a ‘moderate’ force,” they said. It’s probably due to the spring wire used to make this crate.

But we gotta ask here, why is the force thing even on the table in the first place? Considering the potential dangers involved, couldn’t the manufacturers have chosen something else?

The small crate isn’t where the problem is. The big problem is with the so-called large size. According to the manufacturers, the large crate is supposed to cater to German Shepherds, Huskies, Boxers, and similar breeds.

Sorry, are these manufacturers even dog people at all? A GSD can NOT stay in this crate! The large size is just too small. It measures 35 inches. You need, at least 42 inches to house a large breed. This is a very obvious fact that any dog person that has been in the circle for even 5 minutes should know.

(Click here to read our detailed buying guide on everything a dog parent should know about dog crates and crate training.)

We are not even sure the crate comes true to size because some pet parents measured before getting this crate and still, they ran into problems.

Makes sure you don’t get deceived by the displayed picture. We don’t know where they got that crate from, whether the dog was photoshopped, or whether they miniaturized the dog to fit into that crate.

But one thing is sure, what you see in that picture won’t be what you’ll get upon delivery of your package.

The windows and doors of the Bark Brite Collapsible Travel Dog Crate are made of mesh. And you guessed it, they are low-quality yet again. Your dog won’t even have to put any effort into getting out of this crate before he makes a break.

In fact, we are willing to bet that only a very minute proportion of dogs will be able to remain in this crate for up to 1 hour before escaping.

Of course, the mesh windows do the normal things expected of windows. That is, they let the air in, thanks to no effort of the crate, by the way. Air flows, that’s what it does.

But in terms of containment and durability, this crate disappoints us once again. And it’s becoming less surprising.

Soft polyester material… that’s the material used to make this dog crate. There’s no point flogging a dead horse, is there?

But altogether, this crate is made of highly flimsy material. And that thing Bark Brite said about this crate being for crate-trained dogs, don’t take that seriously.

This crate is great to be returned to the seller.

What We Like About The Bark Brite Collapsible Travel Dog Crate

3. Comes with windows and two doors for enhanced ventilation.

4. The brand does have good customer service.

1. This crate is so flimsy and mediocre. The material would hardly hold up under even the slightest abuse.

2. Of course, the zipper is awful too.

3. The large size thing is a myth. There’s no large size of the Bark Brite Collapsible Travel Dog Crate. That size is a medium at best. Do not consider this crate for a large breed.

4. This crate isn’t very stable on the ground and a few dogs can get this thing to roll over once they bound into it.

5. The crate can actually smack people in the face when you set it up. And it does that with moderate force. So, yeah, it kinda hurts something bad.

We’re almost convinced you want something other than our featured product. Here are alternatives you can try. 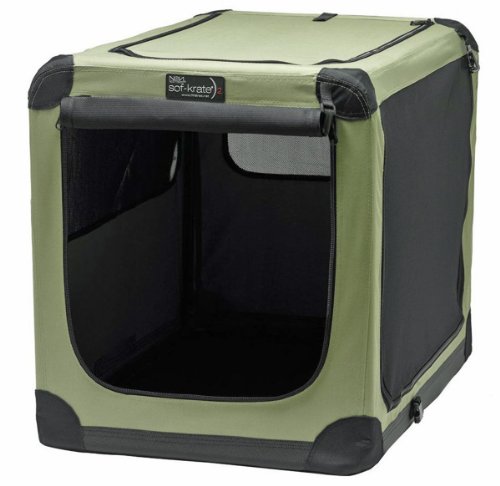 From our reviews, it’s obvious that our featured crate isn’t for any large breed at all. So, here’s for those pet parents who are searching for a dog crate alternative for their large breed babies.

The Noz2Noz Soft-Krater Crate for Pets comes in different sizes up to 42 inches for large breeds. So, here’s something that will actually fit some of the large breed dogs comfortably. Extra extra large dog breeds (e.g. a Great Dane) need an extra extra large dog crate at 48 inches. So, this crate won’t do for them.

You can click here to get a comprehensive review of the Noz2Noz Soft-Krater Crate for Pets if you need further convincing before making a decision. 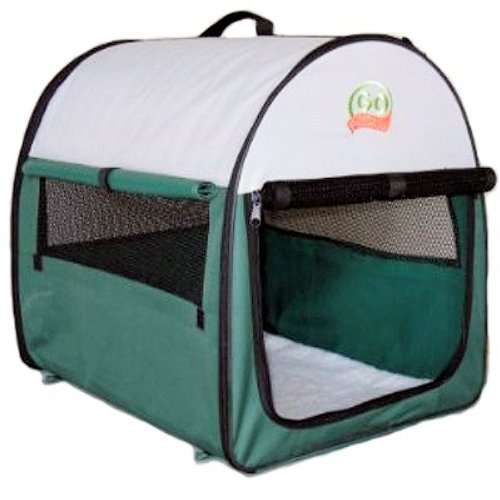 The Go Pet Club Soft Dog Crate is a more user-friendly alternative if you do not wish to get smacked in the face by your crate while setting it up.

It sets up very easily. And when it’s folded down, it takes up less space and weighs a lot less too. This makes the crate a lot easier to use and carry around as well.

This crate comes in different sizes and colors for nearly all kinds of dogs. However, it’s not very heavy duty. So, it won’t hold up under heavy, prolonged use. Click here to read our full review of the Go Pet Club Soft Dog Crate. 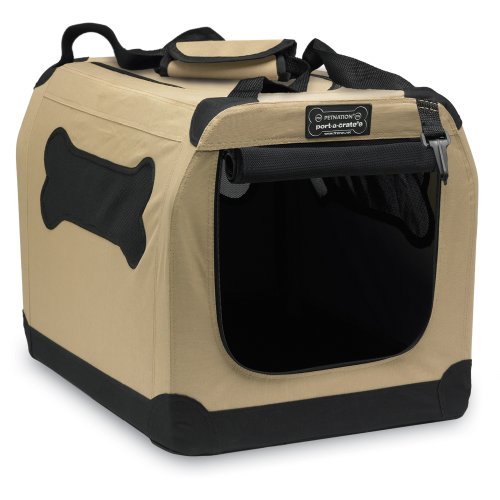 The Petnation Port-A-Crate Dog Crate is a much sturdier soft crate when compared to the Bark Brite Collapsible Travel Dog Crate. It’s made of tightly weaved mesh fabric and comes in 6 sizes. However, the largest size only goes for intermediate breeds. So, keep that in mind. 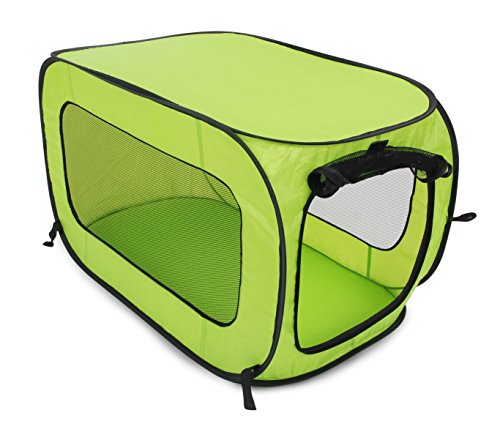 If you need something that’s far more affordable but of far higher quality, try the Beatrice Home Fashions Pop Up Kennel.

Now, this isn’t a heavy-duty crate by any means. In fact, it’s fact quite light construction, and we wouldn’t even recommend it for regular, consistent use. It is better as a travel crate or as a spare crate if you want this to last long enough.

Nonetheless, this crate is still of a much higher quality than the Bark Brite Collapsible Travel Dog Crate. At least this does not smack you in the face, it folds down really flat for convenient travel and storage. Plus, there are loads of fashion colors available as well.

Click here to read our full review of the Beatrice Home Fashions Pop Up Kennel.

Prices and images pulled from the Amazon Product Advertising API on:

What Customers Are Saying About The Bark Brite Collapsible Travel Dog Crate?

It’s not good. There are only so many positive reviews for this crate, the rest are bad. We guess for pet parents with really small, docile dog breeds (not puppies), this crate somewhat served. But only for very few.

Pet parents with large breeds like GSDs and Bernese breeds, for instance, were bummed out to find that this crate in the advertised large would not fit their dog. The sad thing is that the displayed picture advertised a Golden Retriever in the crate. But that is so far from the truth.

And oh how we felt the pain of those who were smacked in the face by the crate. Yes, the brand gave a heads up but it still wasn’t enough to justify putting customers at such risk, especially because that was totally avoidable.

As to the flimsiness of this crate, we guess that’s a universal opinion. Most of the pet parents found the crate to be super flimsy.

Well, it wouldn’t be fair to not mention that luck did shine on some people and the crate lasted nearly a week before it… you know it… before it ripped.

We tried to like this crate. Trust us, we tried our darnedest to find something to love about this crate. But it was just too difficult.

Okay, we could say that the brand comes with good customer service and the crate itself comes well ventilated. But that’s about it.

There’s no other way to say this, but we are not in love with this crate. Bark Brite (or whoever the manufacturer is) skimped on a lot of quality.

Any cookies that may not be particularly necessary for the website to function and is used specifically to collect user personal data via analytics, ads, other embedded contents are termed as non-necessary cookies. It is mandatory to procure user consent prior to running these cookies on your website.