Since its founding in the year 1989, the Night Ize Inc. has been dedicated to the production and distribution of LED equipment. It has everything from LED flashlights and writing equipment to LED pet toys and collars.

The Night Ize Light Up Dog Collar is just one of its attempts at increasing your dog’s visibility. The idea is for your dog to wear it like a regular collar and be seen in the dark or in dim light pretty easily.

You have to bear in mind that the idea is not for your dog to see better but for him to be better seen. So if your dog has issues with his eyesight, check this article on dog eye care and take him to the vet.

Who Is The Night Ize Light Up Dog Collar For?

If you have a big yard and you want your dog to roam while you keep track of his roaming, this collar is for you. It covers a whole 1000 yards with its illumination, so you’ll be able to spot your dog well.

Also, if you have a habit of walking your dog at night, this collar is for you. Everybody, driver or pedestrian, should be able to spot the both of you coming from a mile away.

Dogs shouldn’t have any reactions to this collar. And as regards size, it has 5 size options so your dog should be able to find something that fits.

Features Of The Night Ize Light Up Dog Collar

This collar is actually made of relatively durable nylon. We say “relatively” because its durability depends on how often and how vigorously you use the collar.

The collar is kinda thin so you might not want to use it as a regular collar. The idea behind making the collar thin might have been to make the light shine through even better.

However, we think Night Ize could have made the light shine through as bright as it needed to be without compromising on the durability or, should we say, strength of the collar.

The light is powered by Light Emitting Diode and is visible from as far as 1000 feet away, which is about 304 meters. That is mighty far enough if you ask us.

So, as regards visibility, the Night Ize Light Up Dog Collar scores high enough. The collar is bright enough that your dog can be seen from afar off. Yet not too bright that it affects your dog’s eye sight.

This collar makes use of 1 replaceable battery. The battery is a 2032 battery and should last for as long as 100 hours, depending on the mode of visibility that you are using.

If you need to replace the battery, you’ll most likely have to order another custom made Night Ize Light Up Dog Collar battery. You could decide to use another kind of battery though and see how that goes.

There is a control box hidden in between materials of the collar very close to the D Ring. We like that the box is hidden because it means that your dog cannot easily reach it.

The collar has just two light modes; glow and flash. Well, you can turn it off if you want to but we don’t think that qualifies to be a mode.

Anyway, it is on this control box that you switch between modes and or switch between on and off. Now remember we mentioned something about the longevity of the battery being dependent on the light mode.

Well, according to Night Ize, if the collar is always on glow, the battery could last for as long as 75 hours. However, if you use just the flashes, it could take about 100 hours before you have to change the battery.

The decision of what mode to use or whether to even keep it on is totally up to you. However, we’ll just tell you not to use flashes on busy roads and streets if you don’t want to annoy people.

We have to quickly point out that operating the switch might not be a walk in the park. You don’t exactly need a Ph.D. or the strength of an eagle to operate it. What you need is the patience of a saint.

The clasp used is a black plastic buckle that is secure enough to keep the collar where it is while still being easy to work.

The D Ring is made of metal and is sewn in between folds of fabric. This should make sure that it stays where it is through all the pulling and tugging that is sure to happen when a leash is attached to a collar.

The tri glide is plastic and is of course used to adjust the collar to the appropriate size for your dog. You won’t have a problem with operating this one either.

Is The Night Ize Light Up Dog Collar User Friendly?

Pros Of The Night Ize Light Up Dog Collar

With a visibility of as far as 1000 feet, the Night Ize Light Up Dog Collar has sure got one strong pro.

The basic idea behind the collar is that your dog be seen. So it is definitely not misplaced that Night Ize decided to do a good job on this feature.

The collar presents you with options. First of all, there is the on and off option. Which allows you allow the collar rest.

There is also the glow and flash option. You can decide to go with the battery saving mode (flash) or the steady glow. Whatever is more effective at a particular point in time.

Cons Of The Night Ize Light Up Dog Collar

The material could have been thicker. If it was thicker, maybe it would have doubled as a regular collar conveniently.

Now, all the collar can be used for is what it was made for and not very frequently, which isn’t necessarily a bad thing. But we always like to get more than the value for our money.

The control box is also another thing that could have been better done. Not everybody has the patience of a saint, so Night Ize should do something for us.

Alternative Options To The Night Ize Light Up Dog Collar 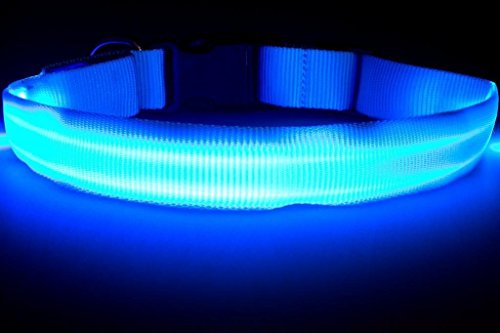 This collar is slightly pricier than our featured product. However, this is not the only reason we’ve listed it. We’ve listed the Great Dealz LED Dog Collar because it is made of stronger stuff and it affords you more light mode options.

You have steady glow, slow flash and fast flash. So, if you have a bit of money to spare, this is a collar to consider. 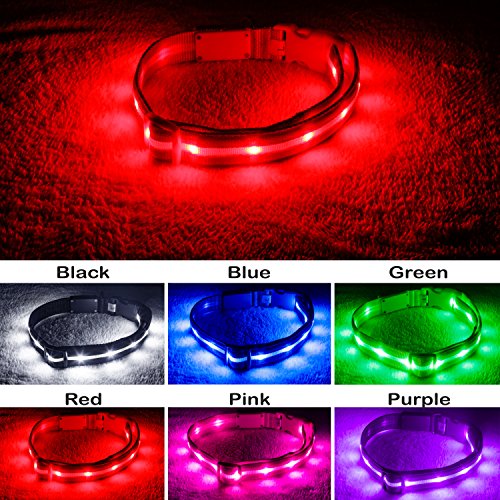 For those that were biting their nails when we said our featured product uses a replaceable battery, here is an awesome option for you. There is no need to worry about where to get the next battery.

The Blazin’ Safety LED Dog Collar is also much pricier than our featured product. However, in the long run, you might come to realize that rechargeable is ultimately more affordable than replaceable.

It also has as many light mode options as the Great Dealz LED Dog Collar. 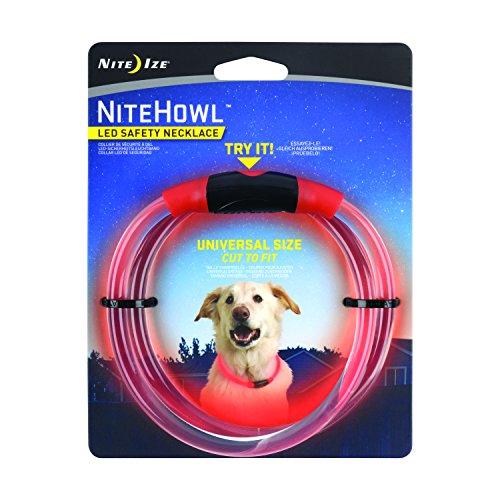 This particular collar is not made of nylon. It is actually made of plastic. And adjusting the collar is as easy as cutting off the excess tube or wrapping the tube round your dog’s neck more than once.

We especially like this collar because the illumination is 360 degrees.

People seem to be fine with this collar because it does what it is supposed to do. It lights up well and lights up far. There’s pretty much nothing else to it.

We can’t fault the Night Ize Light Up Dog Collar for doing its job. We would just have liked for it to have had an extra something to it. Plus the control box could have been easier to operate.