In this review, we look at the Blue Buffalo Wilderness Denali Dinner With Wild Salmon, Venison & Halibut Grain-Free Canned Dog Food. And this is one of the many canned foods produced by the Blue Buffalo brand.

Now about Blue Buffalo. Blue Buffalo is one of the significant number of pet brands today. It does well for itself in the market and could probably be referred to as a mid-range affordable pet food brand. And just so you know, it produces food for both dogs and cats.

Blue Buffalo dog foods cater to a wide variety of dogs from young to old, small to large breed, those who do and those who don’t have sensitive stomachs and even based on personal preferences of the dogs.

As we earlier mentioned, the meal we’ll be reviewing today is of the canned food variety. And the basic idea is to help you see what ingredients have gone into it.

However, because that is pretty easy to do (it’s right there on the body) we’ve gone a step further to tell you what some of those ingredients are about and help you decide whether or not it is a good idea for your dog.

Now that all that’s cleared, let’s see who this meal was created for.

This particular variety is created specifically for adult dogs. That said, Blue Buffalo says any breed of adult dog is welcome to this meal.

You don’t have an adult dog? Not to worry; just stick with us through till the end of the article. We give some food suggestions for dogs in other life stages that you might want to try.

That said, this meal is another one of Blue Buffalo’s really high protein diets and we actually mean really high. It contains a variety of different meats as you’ll get to see soon enough. So, be sure that you pay attention to the list and are sure that your dog does not have an issue with any of them.

If something like this is new to your dog, we like to suggest that you put their veterinarian in the know. If it is alright for your dog to be having this wide a variety, come along let’s look into what this Blue Buffalo Wilderness Denali Dinner has in store.

What this means is that it would be safe to refer to chicken as the primary ingredient in this meal. That said, one has to be careful to note that the ingredients are not arranged in order of how much nutritional value one will get from the ingredients.

The reason is that the ingredients are measured as is (with their water weight and all) and by the time all that extra is stripped away, the actual nutrient will not equal the amount of ingredient used.

That said, we should mention that some dogs have been known to develop some kind of distaste for chicken simply because they are tired of the taste. However, with the variety in this one, such dogs might be willing to try.

The basic idea behind adding chicken broth or fish broth to a meal is for the flavor or palatability it brings. In the case of this dog food though, the chicken broth and fish broth also contribute water content to the whole meal. And this really makes sense to us because you kill two birds with one stone this way.

Chicken liver, or generally any kind of liver even, is good for dogs. Being a part of animal, it isn’t difficult to see that chicken liver is rich in protein. It is maybe even richer in protein than the other parts of the chicken.

However, chicken liver brings more to the equation than protein. Chicken liver is high in fat which is why it is a good idea for underweight dogs or even growing dogs. It also contains a number vitamins and minerals and some people advice that it not be fed to a dog if they are on Vitamin A supplements.

Turkey, in addition to bringing in the protein, also contributes a significant amount of phosphorus which helps with bone and teeth formation and health.

Here is even more animal-based protein. Salmon is a kind of oily fish which is, of course, rich in protein. However, what is on the list of ingredient is ‘wild salmon’ which implies that there is a different kind of salmon.

So basically, there is wild salmon and farmed salmon; the wild kind being the one that roams free in the wild wild seas and the farmed one being the kind that is reared for commercial purposes.

You ask whether there is a difference in what they offer nutritionally. Well, there actually is. Apparently, wild salmon has a significantly higher protein, Omega 6 fatty acids and the DHA Omega 3 fatty acid content than farmed salmon.

On the other hand, farmed salmon has more calories, Vitamins A and D and even saturated fat than the wild kind. So while both kinds of salmon have a significant nutritional value, the wild kind (which is used in this meal) probably offers more.

For those who don’t know, venison is dear meat and it actually doesn’t have as high a protein content as regular red meat. Thankfully though, venison isn’t the only meat used in this meal so it could work really well as a backup protein source; you know, to boost the already high protein content.

That said, venison is not as popular in dog food as beef, chicken or turkey. As a result, it might be a way to get your dog to eat meat if they haven’t been enjoying the others; you know, something new might do the trick. However, be sure that your dog’s veterinarian is Ok with this.

Just so you know, there are six different kinds of meat used in this meal and Halibut is the sixth. Halibut is a white fish that could sort of balance out the oily wild salmon. This fish is rich in protein, the Omega 3 fatty acids and certain minerals including niacin and potassium. 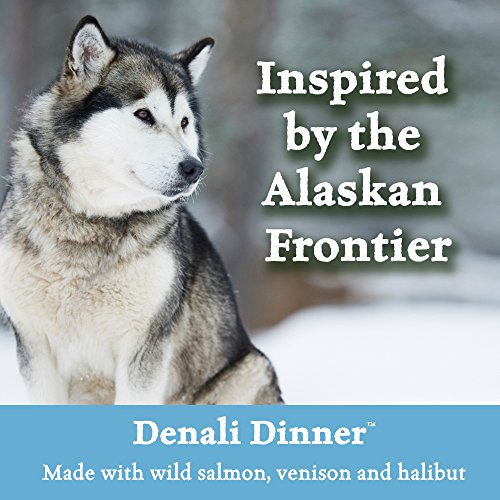 Pea flour is obviously a byproduct of peas and is generally used as some sort of binder for all the ingredients in wet dog food.

In addition, pea flour is rich in fiber which certainly helps with proper digestion and bowel movement. Pea flour also offers a number of other nutrients including calcium and iron.

However, one has to be careful to feed one’s dog only small amounts of pea flour at a time. After all, it is flour which already suggests that it has a significant amount of calories. Thankfully, pea flour doesn’t appear so high up the list so it could mean that not very much was used.

This is our first introduction to plant protein and we are grateful for that. Why? Well, plant protein cannot give your dog all the different kinds of amino acids they need. Which is why it is not advisable to go for a meal that is based on plant protein.

Now, potato protein happens to be a pretty popular plant protein source because potatoes are really affordable. Thankfully, it is an alright source and is in good hands in this meal what with the six animal-based protein sources we’ve already seen.

Here’s even more plant protein. This is basically the same as potato protein. However, for some reason there are more controversies around pea protein than potato protein. Apparently, it contains the insoluble kind of fiber that dogs have not been adapted to digest yet.

Guar gum is an additive added to soup to thicken it. There are a number of other thickeners used in this meal including carrageenan and cassia gum.

However, we consider guar gum the better thickener because unlike carrageenan, it doesn’t have any serious side effects and unlike both carrageenan and cassia gum, it actually has some nutritional value.

Guar gum is rich in fiber and also has some properties that could help improve glucose tolerance and reduce cholesterol levels. 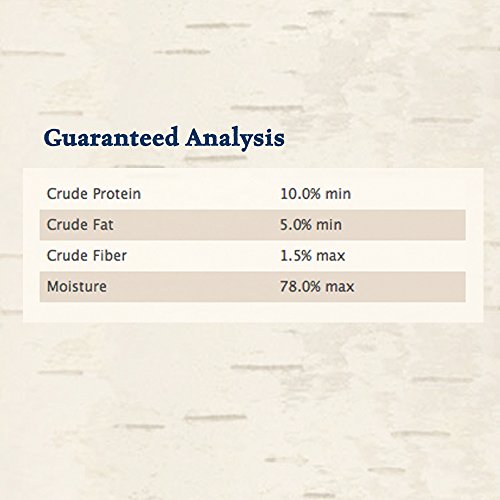 i.  First off, that this meal is high in protein, and the animal kind for that matter, is definitely a pro.

ii. Furthermore, we like that, as usual, Blue Buffalo skipped out on anything artificial; ingredients, additives or even flavor.

i. Though it was not listed in this article because it appears really low on the ingredients list, this meal contains carrageenan. And carrageenan is not the healthiest thickener out there.

So, this one contains almost as many protein sources as our featured product. One advantage this one has over our featured is that it doesn’t contain carrageenan. 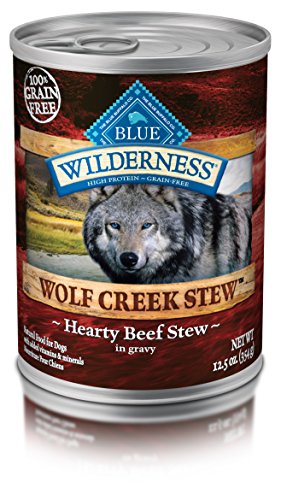 This one doesn’t contain as many animal-based protein sources as our featured product. However, we can say that it contains about enough protein to be classifies as a high protein diet. Plus, it is specially formulated to be easily digested by seniors. 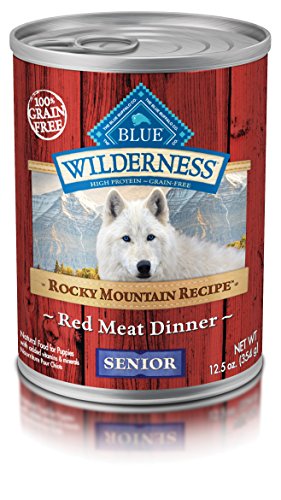 If, On The Other Hand, Your Dog IS Still A Puppy, Consider Getting The Blue Buffalo Wilderness Rocky Mountain Recipe Red meat Dinner Puppy Canned Dog Food

This one also doesn’t contain as much protein as our featured product. In fact, it is really similar to the recipe for senior dogs; about the same ingredients (with a few alterations).

The reactions from dog parents whose dogs have eaten this have been alright. While some seem to think that their dogs love this and they would definitely be getting more, one or two customers said their dogs only though this was OK and they wished the food was sold as single products instead of as a case of 12.

As for the cost of the meal, a good number of parents seem to think that the price attached is alright for a case of 12.

Interested in getting this Blue Buffalo Wilderness Denali Dinner?

We are really impressed with the diversity that the Blue Buffalo Wilderness Denali Dinner With Wild Salmon, Venison & Halibut Grain-Free Canned Dog Food offers. There are a number of different kinds of meats that should be cool for the adventurous dog.

The carrageenan content is something we are still not comfortable with. But generally, this is a really decent meal. However, we always suggest that you speak with your veterinarian before you change your dog’s diet, just to be safe.