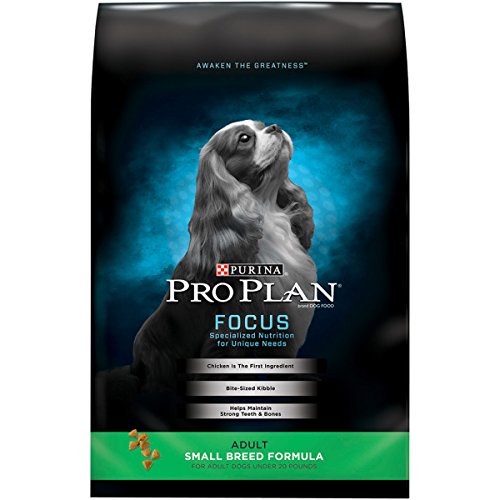 This Dry Dog Food is a product of Nestle Purina Petcare and has been approved by the American Animal Feed Control Officials (AAFCO) having undergone both lab testing and feeding trials.

It seems to get a huge recommendation from dog parents who have bought the product for their pups. Nevertheless, we are not entirely convinced that this product is the best thing since sliced bread.

It does have some merit to it, definitely, but there are also areas where we feel like Purina could have done better. Our in-depth review reveals all that. So, make sure you read to the end.

Just before we move into the main review, here is an article you might find helpful. It’s on organic dog food and everything you need to know about it.

Finally, this is a product for small breed adults. According to the food maker, the product is only made for adult dogs who are under 20 pounds in weight.

Please note that the fact that this is a product for small breeds doesn’t mean it is appropriate for puppies. 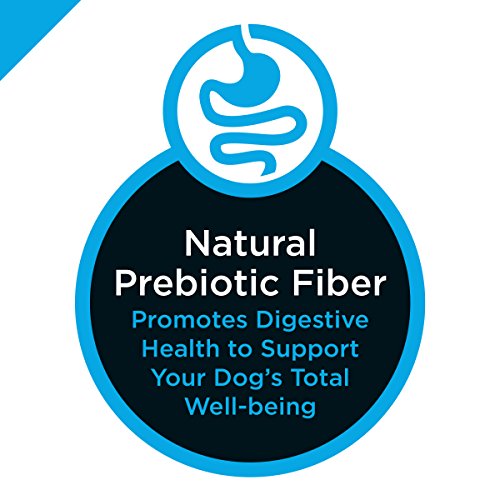 Salmon is a really oily fish and so, besides protein, salmon also makes an excellent source of fatty acids. And the fatty acids that salmon gives are mostly the good kind. Salmon is very low in saturated fats and high in unsaturated fats such as omega-3 fatty acids.

These omega-3s are quite important for dogs with sensitive skin because they help to maintain a shiny, bouncy skin and coat. They also help to repair dull, itchy, or dry skin and coat.

Now, salmon is mostly water. At least, 60% is just water which means that by the time it is cooked only a small portion of meat is actually left. So, to give enough protein, you’d need to use a lot of salmon. However, since that’s not cost-effective, manufacturers supplement protein content by sourcing protein from other places.

Thankfully, in the case of this product, most of the supplementary protein are from animal sources. Meat contains more essential amino acids than plants which is why they are more preferred as sources of protein in dog food.

This one bothers us. Your dog needs grain in their diet to provide them with a source of carbohydrates. However, they don’t need this kind of grain. This isn’t even whole grain, it’s more like leftovers from the processing of white rice.

It’s actually really low in actual ingredients and is, many times, used as a cheap filler. That it is the second ingredient mentioned on the ingredient list should get you somewhat worried.

Now, this is good grain and, thankfully, it is not pearled barley. We are talking about a whole grain of delicious goodness here. Barley is full of nutrients that are great for your dog’s health.

It comes with a high concentration of soluble fiber which helps to reduce glucose levels in the blood. It’s also really low in cholesterol which is bad for your dog’s health.

As much as barley is wonderful, it’s still an advice from experts that you limit the amount of barley you give your dog as with all grains. But, generally though, once your dog is getting a sufficient helping of meat regularly, barley isn’t a totally bad idea.

For commercial dog food products, the rule is to ensure that meat is listed as the first ingredient. You get that with this. So, your dog is safe and also getting sufficiently nourished. 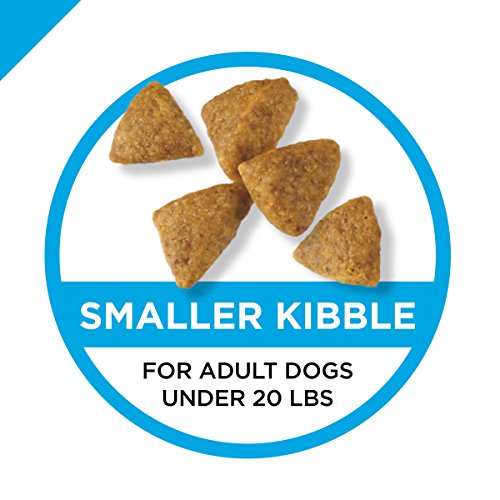 Canola meal is a highly controversial food ingredient for pet food, even though it is quite nutritious. Canola meal is high in protein and can be used as a protein supplement when used together with other plant protein sources, such as pulses.

The problem though is that canola can also be gotten from the genetic modification of rapeseed. And if the canola used to make the canola oil (and consequently meal) is made from a genetically modified rapeseed, it might be an issue as rapeseed is bad for dogs and pets in general.

Fish meal is good for two reasons. First, it is an animal source of protein and that’s something you want in your dog’s diet for the sake of those essential amino acids. Secondly, fish meal is exceptionally high in its protein content thanks to the process of rendering which it undergoes.

Rendering refers to the process by which manufacturers drastically reduce water content in the meat by cooking to leave a chalk-like, high-protein substance.

However, we are always skeptical about nameless animals. What exactly is this fish and from where was it sourced? The fact that it is just listed as “fish” means that we can only guess.

Rich in nutrients, brewers dried yeast makes an excellent ingredient choice in this recipe by Purina. It contains a good balance of vital nutrients such as proteins, selenium, vitamin B complex, and chromium.

Even more importantly, brewers dried yeast has been known to relieve dry and itchy skin – symptoms of sensitive skins in dogs. If, therefore, this is a problem with your pooch, then the presence of brewers dried yeast in this product should be a good omen. 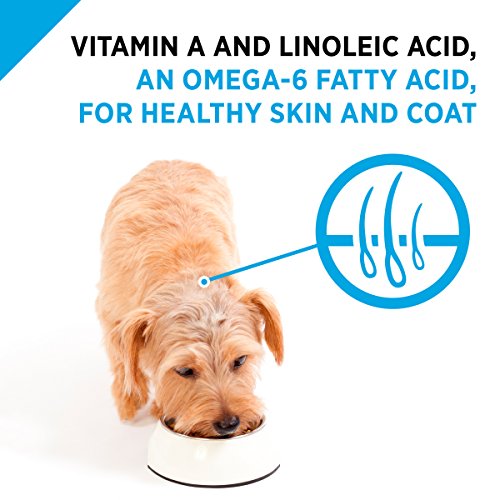 Animal fat is important in the diet of a dog that’s battling with skin and stomach sensitivities and that much cannot be overemphasized. Animal fat contains fatty acids that help to treat and manage the symptoms of sensitive skin.

Besides that, fat also acts as a good source of energy for your dog as well.

As we have made clear in many ways, we have a challenge with unnamed meats and animals in any dog food formula. Yet again, we meet another unnamed meat ingredient in this formula and it’s, understandably, troubling.

We definitely love oatmeal. It’s a fantastic source of supporting nutrients for dogs battling with sensitive stomachs and skins. It’s mostly used as an alternative source of carbohydrates in dog foods in place of grains or wheat.

In fact, omega-6 fatty acids are great for your dog’s skin and coat. They are also great for taking care of vital organs within the body such as the heart and brain of your dog.

Besides that, oatmeal is also quite rich in soluble fiber. This soluble fiber regulates the level of glucose in the blood per time and can help with preventing diabetes in dogs.

It’s also possible that oatmeal has some impact on the relieving of gastrointestinal issues in dogs.

Pretty much like fish meal except that, this time, the fish is named. It’s an excellent protein source in dog foods and a high-quality one at that. It’s also a great way to supplement the protein from the first ingredient – salmon – being an animal-sourced protein and all.

Pea protein is great in that it doesn’t just supply protein in the diet, but it also supplies important amino acids, vitamins, minerals, as well as fiber. All these are super important in the healthy growth and development of your dog.

So, there you have it, an analysis of the most important ingredients of this product. Other ingredients are not of grave importance and so we will skip them and move ahead in this review. 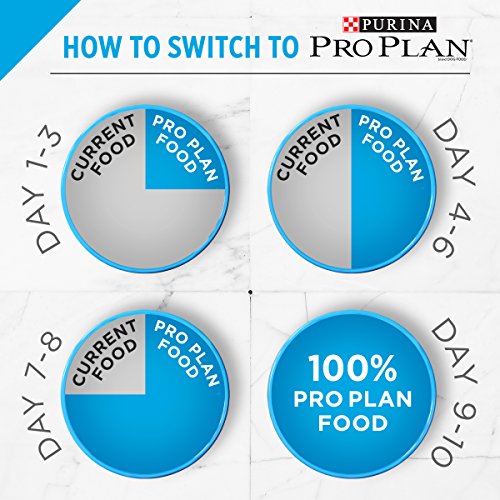 1. It’s great to see here that Purina has made some effort to ensure that most of the protein in this formula has an animal source.

2. This product has a combination of energy-giving grain, proteins, and fatty acids in a balanced manner necessary for your dog’s health as well as relieved sensitivities.

4. Impressive track record of working for dogs who have eaten this food. 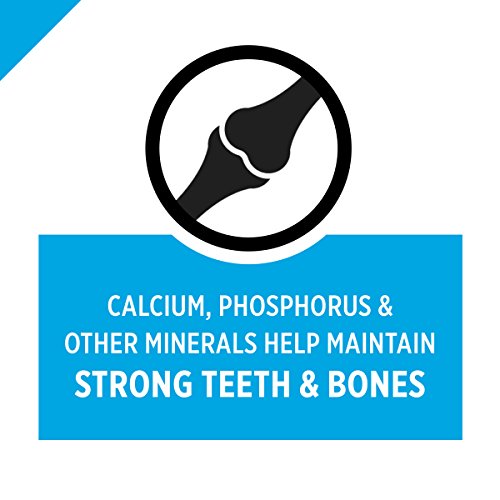 1. Contains anonymous meat ingredients which could is characteristic of cheap, low-quality dog food.

2. Contains brewers rice which is not good grain.

Not Specific To Small Breeds 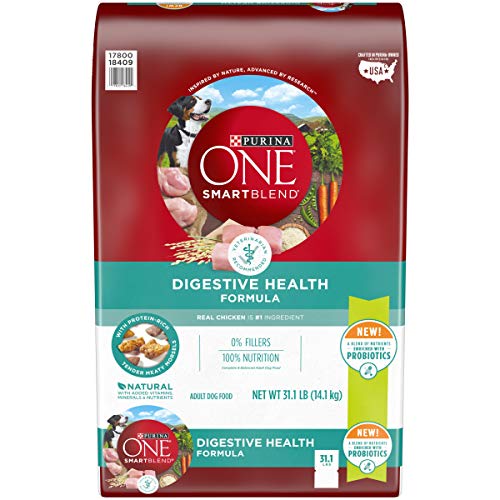 This is a great alternative with a pretty similar ingredient list with that of our featured product. It is not specific to small breeds, and is also affordable. It is available in two sizes which include the 16.5-pound and the 31.1-pound bags. 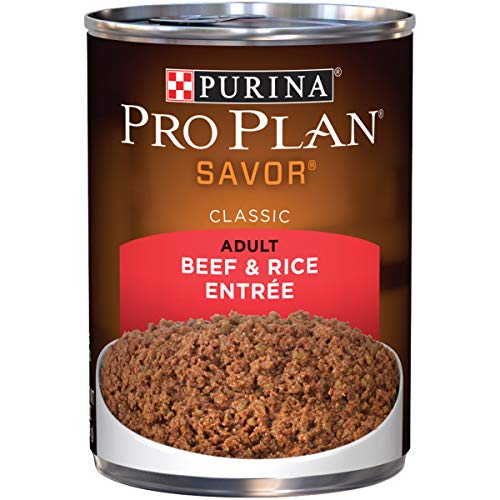 This has chicken as its protein source and if your dog is okay with common sources of protein, then you should give it a try. Wet dog foods are usually more savory than dry dog food and might serve to perk up a picky eater or a dog that’s losing appetite. 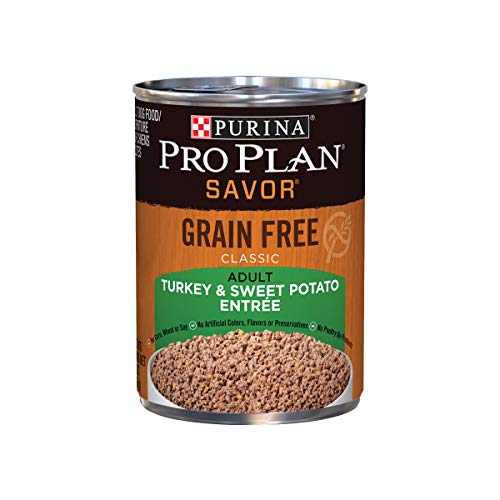 Rather than salmon, you can have another meat as the source of protein. The Purina Pro Plan Savor Adult Grain-free Classic Turkey and Sweet Potato Entrée Canned Dog Food is a delicious wet dog food available in 13-ounce packs of 12.

This food seems to work great for picky eaters as dog parents have observed. Apparently, dogs who won’t eat anything else are gobbling this up. And it isn’t just that they are eating, it’s that they also seem to be responding nicely to the food as well.

Dogs with stooling issues are also seeing some improvements from eating this food, apparently. A customer reports improved stool formation after starting her pup on this diet. Apparently, her dog had been passing out soft stools but as they started on the Purina Pro Plan Focus Small Breed Adult Sensitive Skin and Stomach Formula Dry Dog Food, her pup’s stool began to firm up.

Of course, there were a few dogs who weren’t particularly interested in the food but that’s to be expected, right? All dogs aren’t the same.

The Purina Pro Plan Focus Small Breed Adult Sensitive Skin and Stomach Formula Dry Dog Food is not a high-quality food product and that much is obvious. It’s not terrible, though, as it seems to work for most dogs who ate the food.

However, we think it’s only fair for you to know what exactly it is you’re buying. The food is just average and nothing more. Good thing though is that it is affordable which is probably the reason there are a number of compromises here and there.