In this article, we look at one of Blue Buffalo’s recipes; the Blue Buffalo Wilderness Turkey & Chicken Grill Grain-Free Canned Dog Food.

Blue Buffalo is pretty popular for its many pet foods that are formulated for different pet life stages, preferences and even sizes. And in this article, you get to see what categories this meal falls under.

We’ve also pointed out the ‘important’ ingredients used in this meal. And by important we mean those ingredients that were used in large enough quantities to actually affect something.

Now, to determine which ingredients were used in large quantities and which weren’t look at the order they are written.

That said, let’s get into the meat of the matter.

First off, this particular dog food was created for adult dogs. However, if your dog isn’t an adult yet or he is already past that, you might want to wait a bit because we give suggestions for them later in the article.

Furthermore, the Blue Buffalo Wilderness Turkey & Chicken Grill Grain-Free Canned Dog Food can be fed to dogs of different breeds and sizes; provided they are adults.

We could also talk about the fact that this food is grain-free. And we understand that grain-free dog foods have become quite popular because they are, well, grain free. Apparently dog parents have taken to the alternatives that have been used to replace grains.

These replacement ingredients and more are what we’ll be looking into right now.

The very first ingredient listed is turkey. And based on the premise that we earlier laid about the ingredients being arranged in descending order of quantity used, it is safe to say that turkey is the primary ingredient used.

We like that the first ingredient we are exposed to is animal-based protein because dogs get more protein content from animal sources than from plant sources.

However, you’ll have to bear in mind that, much like basically every other animal based protein, turkey has a high water content. As a result, a lot of turkey might not always be equal to a lot of protein or amino acid.

As a result of this, you’ll have to be careful to check that the food you want to purchase contains other animal-based protein sources high up on the list. Those other sources should properly augment the primary ingredient.

Chicken broth being the second ingredient on the list might or might not be a good thing. The reason for this is that chicken broth doesn’t exactly have any nutritional value. All it basically brings is water and palatability.

In fact, some dog parents have been known to add chicken broth to dry food to spice things up for their dogs. Dogs that have been having issues with their appetite will probably perk up if some chicken broth is thrown into the mix.

However, that’s basically all there is to chicken broth; the palatability value and some water. We are not saying that’s a bad thing; after all food has to taste good in addition to being good. Nonetheless, maybe it could have come a little lower on the list.

Remember this meal is a turkey and chicken grill; so, we were bound to come across some chicken at some point. It is sure a good thing that the chicken comes quite high up the list.

That said, much like the turkey, chicken has a high water content; higher than the protein it contains. So, despite the fact that we’ve seen turkey and then this chicken, there is still need for some more protein sources if your dog is to get his required portion.

Here is our first introduction to a plant source ingredient. Potato protein is basically a by-product gotten from processing potatoes.

It is recommended that animal protein be the primary protein source of any dog food and not plant protein. The reason is that plant protein doesn’t contain all the amino acid components that your dog needs.

Nonetheless, if plant protein is used to beef-up (no pun intended) the protein content then it should be fine.

We’ve already seen potato protein, so we aren’t exactly new to potatoes. Potatoes are often used in a lot of grain-free diets as a substitute for grains. It is inexpensive and contains a decent amount of complex carbs to provide your adult dog the energy he needs.

Additionally, potatoes are a good source of potassium which could help with your dog’s blood pressure and overall cardiovascular health. Potatoes also contain some other vitamins and minerals that your dog will find needful.

It is alright to have these plant-based protein in your dog’s meal. However, so far, the only animal-based protein we’ve come across are the turkey and the chicken. Granted they both appear quite high on the list but it is still just two of them and they both have a high water content so….

Anyway, flaxseed is actually a good source of protein for dogs. It also contains Omega 3 and Omega 6 fatty acids; both of which dogs cannot produce by themselves but are necessary for a healthy skin and coat. Your dog will also be getting some fiber from the flaxseed which should help with bowel movement.

Wow! It is a wonder that carrageenan is still added to dog food because it doesn’t have any good reviews at all. Well, probably the only good thing it has going for it is that it is a natural additive. However, what good is ‘natural’ if there is nothing good coming from it.

First off, carrageenan has no nutritional value. It is usually added to canned/wet food to serve as an emulsifier or a thickener. And it would have been alright if that were all.

However, carrageenan has been known to have some negative effects in both dogs and humans. It has been known to cause some gastro-intestinal issues and even cancer. So yea, we are really wary of this ingredient.

Guar gum is also a thickening agent that you might find in some wet dog foods. This is actually a better thickener than carrageenan basically because it doesn’t have any major negative effects on your dog’s health.

In fact, guar gum contains dietary fiber that will certainly help your dog digest stuff easier and faster and will also help with proper bowel movement. Guar gum could also increase your dog’s tolerance to glucose and reduce their cholesterol level.

Cassia gum is yet another food additive used as a thickening agent in pet foods. However, unlike the guar gum, cassia gum has no nutritional value; it only serves to gel all the components of the meal together.

Also, unlike carrageenan, cassia gum doesn’t have much of a negative effect on the consumer. In fact, it is said that cassia gum degenerates into sugar, if it degenerates at all. And we know that sugar is not a bad thing for dogs.

What’s in it is certainly enough for them. Plus, you do not want to feed your dog salty snacks because once they get a real liking for those things, it will be really difficult to break them off it.

i.  We are not really impressed with the fact that this meal contains only two animal-based protein sources.

ii.  Furthermore, this food contains carrageenan which has been known to have no nutritional value and a lot of negative side effects. It makes one wonder why Blue Buffalo bothered to add this to the mix.

iii. Also, we understand that this is a wet dog food. However, there looks to be a lot of thickeners and emulsifiers which have no nutritional value.

Option For A Puppy

If you are good with our featured product, you’ll have no issues with this one. It contains basically the same ingredients as our featured product. However, it is specially formulated for puppies with smaller chunks that make it easier for your pup to chew. 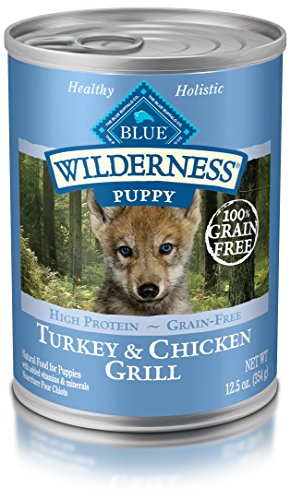 Option For A Senior

This one is also basically the same as our feature product. However, it is formulated for senior dogs such that it is even easier to digest and also smells more palatable so that senior dogs who have been having issues with their appetite might actually want to eat. 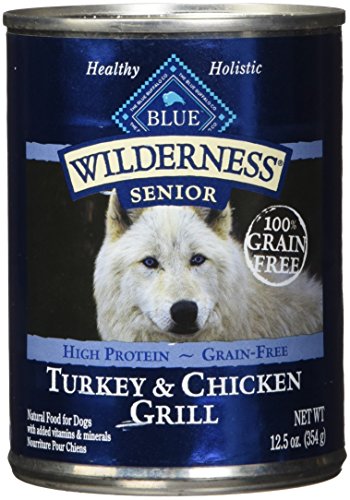 This is the dry food variant of our featured product. We actually prefer this one because there is a heavy reliance on animal-based product. This one is formulated for adult dogs if you are thinking of trying it out. 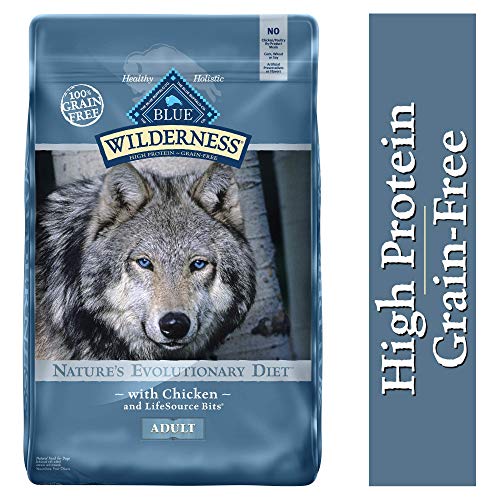 Basically every dog parent is down with the Blue Buffalo Wilderness Turkey & Chicken Grill Grain-Free canned Dog Food. A lot of parents have said that this is one food that their picky eaters have been able to eat a lot of.

Even those that switch from dry food to this particular wet food do not seem to have any issues with it. Some dog parents also mentioned that the food is affordable enough.

Think this Blue Buffalo Turkey & Chicken Grill is something you want your dog to try out?

We, however, are not excited about this particular meal. In our opinion, there just isn’t enough animal-based protein in the Blue Buffalo Wilderness Turkey & Chicken Grill Grain-Free Canned Dog Food for us to be OK with it.

We are actually kinda surprised because the other wet dog foods for puppies and seniors by Blue Buffalo have a bit more animal protein. Plus, their dry dog foods are filled with the stuff.

We also are not comfortable with the amount of thickeners without any nutritional value that were used in this meal. The carrageenan gives us a lot more cause to be wary. However, maybe it is just us being overly sensitive. Just be sure that your vet is alright with your choice.