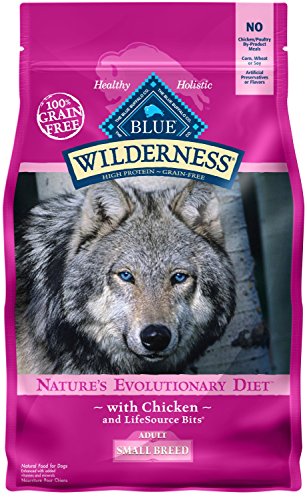 That said, in this article, we show you the important ingredients that you’ll find in this food. We also quickly explain what those ingredients are and their nutritional value.

Before we go in, make sure that you are never too far away from your dog’s veterinarian. Now, let’s dive right in.

First off, this small breed food from Blue Buffalo is for adult dogs. So, if you only have puppies, you could wait till towards the end of this article where we give you other options including one you could consider for your puppies.

It is also a high-protein and grain-free meal.

One last thing, be sure that your dog is poultry tolerant because there is heavy use of chicken in this food.

And we are sure you know to always be in agreement with your dog’s veterinarian, especially if your dog has special needs and you’re starting something new.

For small dog breeds, everything has to be handled with care so that it doesn’t cause any complications in digestion.

So, it is surely a good thing that the chicken used in this food is deboned; that is, the bones have been removed such that your pooch need not struggle with bones as he chomps.

That said, chicken, like basically every other animal protein, has a lot of water content. As a result, there will have to be a lot of it (or something to augment) if your dog is to get all the protein he ought to.

We recommend that you check what the first few ingredients of the food you want to buy are. Be sure that a good number of them are meat-based because animal protein is a better protein source than plant protein.

Chicken meal is chicken that has been rendered such that a lot of the water is removed, and so, it just might actually be a better protein source (in terms of quantity) than actual chicken.

So, your dog actually gets a lot more protein from chicken meal than from actual chicken; at least in this food.

Now, some people might be skeptical about chicken meal because what they have in mind is that it isn’t actual chicken.

But remember, though, that it is just chicken that has been rendered; no additives or flavoring or such. Chicken meal is actually a safe protein source for your dog.

One more thing. Blue Buffalo lists the chicken meal as this food’s source of Glucosamine. Glucosamine is necessary for dogs of any age as it helps with mobility by helping keep the joints healthy. 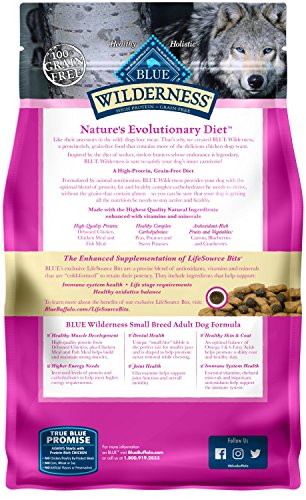 That said, having seen that the first two ingredients are animal-based protein, it is alright for us to see a plant-based protein. Pea protein is basically peas that have had the starch extracted from them.

On its own, pea protein, like basically every other plant protein; isn’t a sufficient source of protein for dogs.

So, it is sure a good thing that the Blue Buffalo Wilderness Small Breed Chicken Recipe Grain-Free Dry Dog Food has a heavy reliance on animal sources than on peas.

Now, here is our first foray into carbs. Now, we know that a few people might not agree, but your dog actually needs their carbs.

Remember that carbs are energy-giving, so, your dog will need it in reasonable quantities to be able to do his running around.

Pea as a carb source is actually one of the alternatives for grains that some brands like Blue Buffalo have decided to adopt.

And in addition to being a carb and protein source, peas also happen to contain some essential vitamins and minerals including some vitamins B, zinc, and potassium.

The name of this ingredient already alludes to what it is; a starch source. Tapioca starch is also used as an alternative carb source for those other ones that brands do not want to use.

However, aside from being an alternative carb source, tapioca starch is usually used as a kind of binding agent.

Because it is dry, kibble needs that something that binds ingredients together and tapioca starch (which is gluten-free, we might add) is a good choice.

However, tapioca starch has been known to be a cause of increased insulin for both humans and animals. So, if your dog is diabetic or obese, you want to check in with their veterinarian before you start serving them this food.

Something else to look out for when you shop for dog food is any ingredient tagged ‘meal’. You want to look at what comes before the ‘meal’ and if it is something not specific like ‘poultry’ or ‘meat’ or ’fish’, be wary of such.

The thing is that if things aren’t clearly spelled out like the ‘chicken meal’ and ‘menhaden fish meal’, it really could be anything.

Now, yes, even with the specificity, there still could be some things fishy. But at least, the specificity offers you some assurance, unlike the obscure meals.

That said, menhaden fish is a kind of oily fish that is a good source of Omega 3 and Omega 6 fatty acid.

And while it isn’t exactly safe for humans, the rendered kind (remember the water and oil content have been greatly reduced) is a safe protein source for dogs. 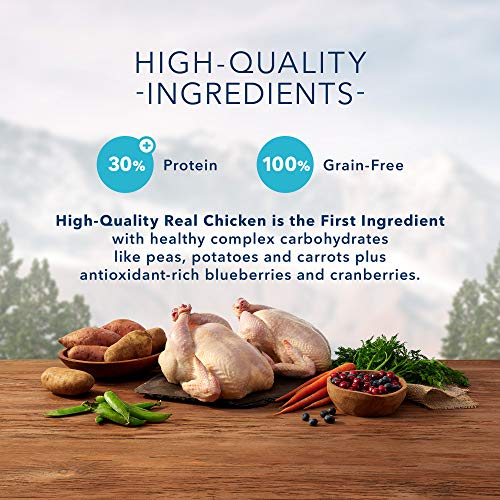 This is basically whole egg (without the shell) that has been dehydrated and formed into a powder. It is basically the only way that egg can be into dry food or kibble.

That said, with dried egg, your dog is able to get as much protein value as possible, seeing as water (which is usually a major component) has been extracted to a very large extent.

Aside from that, though, the dehydration process causes dried egg to have a longer shelf life than raw egg.

That said, if you’ve been following through from the beginning of the article, you’ll agree with us that this meal has a heavy reliance on animal-based protein. And that is a really good thing for your dog.

Just like your dog needs their carbs, they also need their fat. They need it to help them regulate body temperature and also be a source of energy for when they bound around.

Chicken fat also happens to be a good source of Omega 6 fatty acid.

Furthermore, you’ll notice that it says that the chicken fat used is preserved with mixed tocopherols.

Mixed tocopherols are a form of preservatives which is necessary because animal fat tends to go bad really quickly.

So, in order to extend the shelf life of the chicken fat component, and by extension, the whole food, it is important that the fat is preserved.

Like the other plant-based protein that we’ve mentioned here, flaxseed is a good top-up for the already high protein levels from the animal sources.

In addition to that, flaxseed is a good source of Omega 3 and Omega 6 fatty acids, both of which will help significantly improve your dog’s skin and coat health, among other things.

Flaxseed also happens to be a good source of fiber which will help with digestion.

Now, don’t get us wrong; natural flavor is not the final ingredient in the Blue Buffalo Small Breed Dry Dog Food. However, it is our opinion that the other ingredients might not have such a dramatic or really significant effect on the food altogether.

That said, natural flavor doesn’t exactly have any nutritional value. It is basically just added to food to make it more palatable for the eater.

However, there is a bit of controversy surrounding the idea of natural flavor. It is a bit ambiguous as it is only referred to as flavor that is not man-made.

So, some people fear that, because of this ambiguity, if a food says ‘chicken-flavored’, the flavor might have come from anywhere except a chicken and it would still be OK; provided it is man-made.

The best way to go about this natural flavor thing is to find a brand you really trust and stick with it.

i.  This meal has a heavy reliance on animal-based protein which is a good thing as it is as close to a dog’s natural meal as possible. You can be sure that your dog is getting as much protein as he needs.

ii.  We also really like that every meal ingredient used in this food is specific; from the chicken meal to the menhaden fish meal.

iii. Finally, from what we can see, there are no artificial ingredients or flavors used in this food. It looks to be all-natural.

The only thing that could be a big issue is the use of natural flavor. There is no way to be sure of exactly what it was derived from.

Is Your Dog Not A Fan Of Chicken? Check Out The Blue Buffalo Wilderness Small Breed Rocky Mountain Recipe With Red Meat Grain-Free Dry Dog Food

There are many other alternatives to chicken out there. One of them is this red meat variant. So, if your dog doesn’t like chicken, you could try out this variant. However, be sure that he doesn’t have an aversion to meat-based protein in general.

That said, this food has basically the same ingredients as our featured product. Just replace deboned chicken with deboned beef and you’ve got this product. 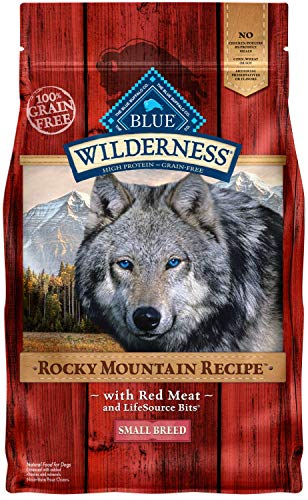 Would You Rather Have Your Dog On Wet Food? Check Out The Blue Buffalo Wilderness Small Breed Turkey And Chicken Grill Grain-Free Dog Food

Here is another chicken-based food that your dog can try. It has some turkey in there too for that variety taste. If your dog hasn’t been finishing his meal lately, you’ll want to take him to see his vet.

However, in the meantime, canned food is something you can try. Because it is wet, your dog will be able to perceive it and that could awaken his appetite. 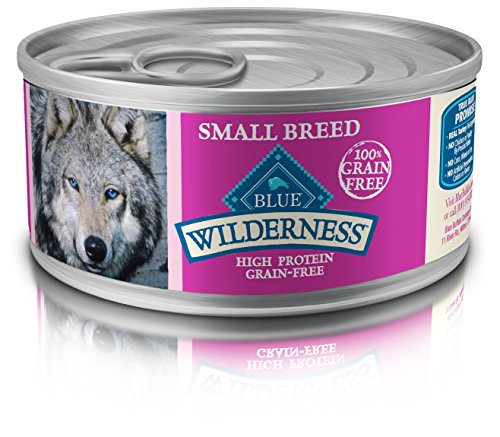 Do You Have A Puppy Instead? Try Out The Blue Buffalo Wilderness Puppy Grain Free Chicken Recipe

This particular one is pretty much the same as our featured product. The only difference is that it is specially formulated for puppies. 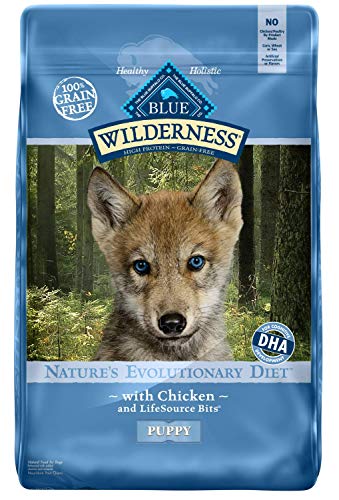 An impressive number of dog parents actually happen to like this product. Some of them have said that the Blue Buffalo Wilderness Small Breed Meal has been able to satisfy their different small breed dogs.

There have also been comments on the fact that the dogs eat this food without needing any sort of accompaniment. Yet others have said that this meal is pretty affordable. However, one customer mentioned that their dogs preferred the red meat variant to the chicken variant.

To the best of our knowledge, natural products alone are used and there is a heavy reliance on animal-based protein. Both of these spells good news for your dog.

However, we recommend that you get in contact with your dog’s vet before you change his diet or food type.